Lisa, Welcome to “Writers Chat” and congratulations on the much-deserved accolades Harvesting (New Island, 2017) has been receiving, including being awarded The Kate O’Brien Award (2018), short listed in the Newcomer section for Irish Book of the Year in 2017 and now shortlisted for the Kerry Group Irish Novel of the Year Award (winners announced on May 30th in Listowel) 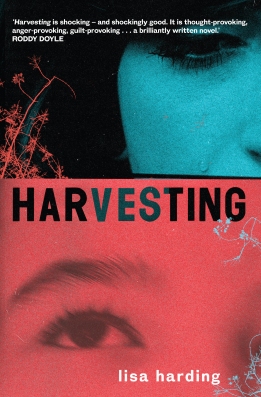 SG: Firstly, Lisa, let’s talk about the many stories behind Harvesting and what drove you to take on such a harrowing and emotional journey with your two strong female narrators Sammy and Nico.

LH: The book came about because of my involvement in a campaign called Stop Sex Trafficking of Children and Young People run by the children’s Rights Alliance and the Body Shop. At the launch of that campaign in 2012, I was invited in my capacity as an actress to read first-hand accounts of some of the girls who had been trafficked to Ireland. What shocked me was how prevalent the trade is, how young some of the girls are and also that some of the girls that fall into the rings are Irish. Up until that day I had no idea this trade was happening on our shores.

It took me three years before I allowed myself to start to write about the topic. I struggled with legitimacy around telling these stories: who am I to give voice to these girls’ experiences? I am not an expert, nor a survivor, but something had burrowed inside me and I genuinely felt haunted by the testimonies I read that day. I found myself unable and unwilling to forget, and so set out to give voice to these hidden victims of this dark, flourishing world.

Sammy and Nico, although purely fictitious character, are composites of some of the personal accounts I was furnished with.

SG: I think that is why both women come across as such authentic characters. Now tell me about your process – in getting into the psyches of these women, in being able to so aptly explore their inner and outer worlds. Did you find that your experience in play writing and acting helped? I’m thinking of scenes, for example, where Sammy says “I empty out inside and allow myself to go floppy” (p.209) or Nico when she reminds herself before she takes the man’s stray hairs: “If I don’t breathe I’m not really there, not really.” (p.213)

LH: I adopt an improvisational approach to any creative process, which is greatly informed by my training as an actress.  I always start with a voice, and if I feel I can channel that voice, step inside the character’s skin, fully embody it, the writing will flow naturally from there.  Initially I didn’t know Harvesting would be a novel, the form was mutable as I was allowing different voices space inside my head. It could have been a play, or a series of interconnected short stories, but over time two voices start to clamour for more attention and space on the page. The consciousness of Sammy and Nico felt more alive and embodied than any of the other characters. The novel is in essence a series of alternating monologues told from the perspective of an Irish girl and a Moldovan girl.

As Harvesting is written in the first person present tense, everything that happens to these girls is being experienced and written about in the moment. The process of writing in this way is rather like channelling, where you bypass the conscious mind, or the intellect as much as possible and give yourself over to your instinct.

SG: Oh how wonderful that you felt free enough to let the narrative evolve and become the form it needed to become to tell the story. Lisa, let’s consider the role of place in Sammy’s Dublin is both her anchor and the city which fails to save her, while Nico’s Moldova fades as Dublin – what she is exposed to as ‘Dub’ – engulfs her. It seems Sammy and Nico both loose who they are and where they’re from simultaneously.

LH: That’s a really interesting observation, and not one I was consciously aware of at the time of writing. For Nico, the natural world was her home, growing up in a rural Moldovan village where her favourite activities were climbing trees and swimming in the rivers. Suddenly she is wrenched from this environment, the only world she ever knew, and is transported in cars, boats and planes from Moldova to Italy to London to Belfast, then finally Dublin. She is disoriented and dislocated early on. She regularly reverts to her favourite childhood spots in the moment of trauma where she dissociates from herself and her actual environment. I imagined her focus was slightly blurred in a bid to protect herself and so Dublin is experienced as a characterless place that could be anywhere. She only sees the inside of the holding house and the inside of a car and the inside of bedrooms. She yearns for nature yet has no direct contact; all she sees through fogged up windows is grey skies and rain.

Sammy is a suburban Dublin girl, so her environment is less alien, but her experience is. They are both brought to a ghost estate and their life of entrapment is played out against the backdrop of private parties, convention centres, bars, hotels. I felt if I was looking out on their world in their particular emotional state it would be heightened, bizarre, terrifying. Even those environments that were previously familiar take on an outlandish, almost ghoulish quality.

SG: Without revealing anything, Sammy and Nico start off and end in very different places. Between their beginnings and endings in their relationship we encounter moving tenderness, humorous quips while they each try to protect and provide some sort of comfort – and even love – each other.

LH: My two main motivators for writing this book were: (1) How can this happen? And (2) how do the girls survive and assimilate this sustained level of abuse? This second question feeds into your observation about their relationship, which is intense, at times verging on the hysterical. They are teenage girls who form a fierce bond under siege. I fell in love with the two girls as they navigated an unlikely friendship that becomes their everything. In each other they find humanity in a brutal, uncaring world. I was surprised how both girls use humour to deflect, protect and ultimately bond. But then, I realised they are so young and so impressionable and they need that ferocious love and loyalty to survive.

SG: I love how, at times, your writing is stark – factual almost – and then, also beautifully poetic. Nico describes the pain of two sisters as “palpable – it beats in the air like injured birds, trapped” (p236) and in another scene “I squint and blur my vision, but cannot see a rescuing knight no matter how hard I try.” (p281)

Sammy, locked inside on a day that seems particularly long tries

“not to listen to the bird-song, which I can hear over the wind and thrum of the tumble dryer. She’s so loud and insistent for such a tiny thing. I know, I know, I get it, birdie, but shut the fuck up, will ya?” (p242)

Do you think using different styles and language to convey changes in emotional tempo shows us that in the most awful of circumstances there is often – though unfortunately, not always – a glimmer of hope?

LH: That’s a really lovely compliment, thank you! Again, an unconscious lucky accident,  although I imagine my history in theatre fed into that melding of styles. Writers like Tennessee Williams, and in a completely contrasting way Sarah Kane, bring poetry, lyricism and a heightened sensibility to experiences of brutality. The lives Sammy and Nico are living are so far removed from the norms of the everyday that I felt colloquial language couldn’t always express their complex interior lives. They are so outside themselves and unable to process what is happening to them in the moment that I did struggle at times to find words to express this turmoil. Music could perhaps better express this turbulent inner landscape of trauma. I guess in some ways, heightened theatrical or poetic language can offer a kind of transformation, or transmutation, so perhaps unconsciously this was what I was playing with.

Yes, hope. I felt the fact of them being alive and capable of loving each other meant there was always hope.

SG: You participated and read from Harvesting as part of a symposium on modern slavery in Armagh on March 8th. How powerful do you think writing can be in today’s world where brevity is king?

LH: That was an extraordinary event. It was humbling to realise the importance of the role of the arts in raising awareness. The organiser of the symposium had come across Harvesting some time ago and was moved to organise an entire event on modern slavery because of his experience reading the book. So, I guess we cannot underestimate the effect of writing, even in such a time-poor, social-media saturated climate where Netflix is king. I imagine a visual medium might have even more impact, but then we lose the intimacy and interiority that only the novel allows.

SG: I think the key is that the novel form encourages or even demands self-reflection from the reader after it’s been read – in a way that other forms don’t.

What are you reading now? Troubling Love by Elena Ferrante.

I read that over Christmas – in one sitting – and really loved it. Both disturbing and beautiful.

What writing are you working on? A new novel about the generational impact of alcoholism and the limitations of recovery.

What’s next for you? The above novel, and then…hopefully others. I’m a newbie in love with the form.

Sounds like you’re on a roll, Lisa. Keep on going! 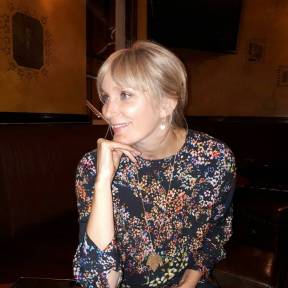 Thanks again for popping over for the sixth “Writers Chat”. I look forward to reading more of your work over time and wish you more of the very best with Harvesting which can be ordered here.