Aoibheann, Welcome to my WRITERS CHAT series and thanks for participating so fully.

Congratulations on your debut novel Marina which Mike McCormack has described (and I’d thoroughly agree!) as a “singular enchantment” and which also has a really stunning cover:

SG: First and foremost, tell me a little about Marina’s love of the sea.

The story seems to be about a circular journey from childhood to adulthood, and from Ireland to England, yet at another level, Marina seems to be a contemplation on how disconnected we all are from the land – dry and wet ground – that we live on and in.

You’re from Donegal and now living in Galway. Did you use your own knowledge of the sea and its landscape, and also that sense of being away from home (as Marina is in London) in writing this beautiful sensory novel?

AMC: Marina’s love of the sea is a theme throughout the novel, and it has a very strong pull for her. Throughout the novel, she associates the sea with escape, be it by boat or by swimming. Though when she eventually does escape across the Irish Sea, it does not work out so well for her. I think we are all very disconnected from the earth these days and that causes us a lot of problems.

I grew up beside the sea and was brought out on boats from a very young age. My family were mariners for generations so I have a deep generational connection with the sea. Luckily I still live near the sea in Galway and can see it out of my bedroom window. The further I get from the sea the more trapped I feel, but it also utterly scares me, as a lot of my relatives died at sea.

I lived in London for a number of years, my daughter was actually born there, and I although I loved the freedom of it, I always missed the sea and had a strong urge to return to Ireland. Especially when I was pregnant for some reason. I think I actually saw a mirage on a particularly hot day just before she was born!

The sea helped me to write the book too. I was inspired to write Marina in the aquarium in Salthill in Galway. I was looking at a fish in a seawater tank, it looked miserable, and this is where Marina sprang from.

SG: What an amazing image – you by the sea gazing at fish trapped in a tank, both surrounded by seawater…But then there’s all that history and inner knowledge you have about the sea that seeps through the novel.

I loved the writing throughout In particular, I loved the poetic writing which grabs you right from the start:

“Belonging like they did when I saw them, floating in the sea, the green fronds of seaweed caressing their pale skin. They are nibbled gently, caressed by tiny fish who, bit by bit, ingest them, return them, welcome them.”

It also extends into the stuff of life – we’re told

“The piano was truly the instrument of fate”

and, when Jamie is born, he’s

“red and squashed, as if he’d come out of a shell.”

AMC: Thank you! I started off as a poet, in fact the first piece of writing I got published was a poem. Though I rarely write poetry these days, it is still there in my writing. I think the prologue and the intervals are the most poetic parts of the book, where Marina describes the world as she sees it in her very disjointed way. I was inspired to write these parts in my garden and walking by the sea. I think especially at these points I could see ordinary things from Marina’s perspective, and as she seems to be able to zone so completely into things and is so removed from social concerns, she is able to describe things more precisely or more poetically. I think poetry is about seeing things from a very different perspective.

SG: Yes! And now that you say it, that’s really what I loved about Marina – that sense of the word view being turned somewhat.

I read Marina in one sitting and gasped when I came to the end – without revealing anything – it was like I was in the sea, coming up for air, or that a wave of a life of emotions had just washed over me. For me, this is a great reading experience, when you’re taken somewhere else entirely and then when the book finishes, you’re back to the grey skies (not unlike those of Marina’s life!) and reality. How important a role do you think atmosphere plays in this story – in keeping the reader embedded in the parallel clarity and murkiness of the waters of Marina’s thoughts, compared to Jamie’s thoughts which are shown as been numbed with medication?

AMC: Again, thank you, that’s great feedback for a writer! The first draft of the story didn’t feature the parallel story of Marina in the present, which I think provides the context of her version of the ultimately tragic events and her justification for what happened. It also adds to the atmosphere, as it is clear that her thoughts are murky from the start. Dr. O’Hara provides the clear voice of reason, but can be very harsh. I often think we put labels on people so we can rationalise their actions and there isn’t always a rational explanation for why people behave as they do. We like to think we can explain people’s behaviour by looking at their childhood but I don’t think we can. Of course, Jamie never really gets a voice, so we only have Marina’s (unreliable) version of the events, so we have to take her word for it. So overall I tried to make the atmosphere like the deep water that Marina inhabits in her mind.

SG: Yes. It saddens me how labels often seek answers yet in doing so can move further from those very answers.

Marina is also about relationships. We have the one which is constant – Marina and her relationship to sea, including being at sea for most of the story – and we have the one which we, as readers, see evolving into something that isn’t quite what we would have hoped for Marina: her love for Jules, the young man she falls for at university in London. It’s really a question of like attracting like rather than opposites attract – especially if we consider that the less they verbally communicate, the less they each play their instruments. Can you talk a little about that relationship – in which Marina, at one stage, feels

“smaller than an ant”

AMC: I think Marina and Jules’ relationship is ultimately very unhealthy and obsessional. It is further exacerbated by Sandra’s influence. I think Marina tries to find a replacement for Jamie in Jules, but also she feels haunted by what she feels is a betrayal of Jamie so I think she justifies Jules’ cruelty because of this.

Jules and his mother are very controlling. I think Marina feels smothered by this but the further away from the sea and her music she gets, the more trapped she becomes, and it takes something drastic for her to return to Ireland.

SG: We’ve talked about the role of the land in Marina, but of course there’s the wider question of the environment and how we are destroying it. Can you talk about how Jules and his involvement with environmental groups adds to that theme, indeed, perhaps this being the one of the first things that Marina learns about him is also what attracts her to him.

AMC: The environmental theme was always a big part of the book, though it isn’t really part of the plot. I thought about evolution a lot when I was writing the first draft: if we are so evolved as a species, why are we destroying the environment that sustains us? If you consider this, it actually explains Marina’s destructive behaviour and why she ultimately feels humanity isn’t all it is cracked up to be. There is a strand of psychology called eco-psychology which believes that mental illnesses are caused by environmental damage; if the earth is being destroyed, then we inevitably will be too. As it suffers, so do we. Also, I thought a lot about the Buddhist Wheel of Life, which shows evolution in the form of reincarnation; the more good deeds we do, the more likely we are to ‘evolve’ into a higher life form. Again, I thought, are we really a higher life form if we are destroying ourselves like this?

As for eco-warriors, I hung around with some at college, and they were always so sure of themselves and what they were doing. Jules’ character and especially those of his friends are inspired by them. My life experience is in no way like Marina’s, but I was asked to stop eating a Kit Kat in my own house by an eco-warrior! I think Marina is so lost and scared, she latches on to Jules as he seems so sure of everything, as do his friends. They see something wrong in the world too, and are better able to articulate this than she is.

Yes – these are all questions that I asked myself as I was reading and, more so, when I’d finished the novel, and, found myself understanding Marina’s behaviour.

Dogs or Cats? Dogs. I have two!

Thank you for such insight, Aoibheann and I wish you much success with Marina. 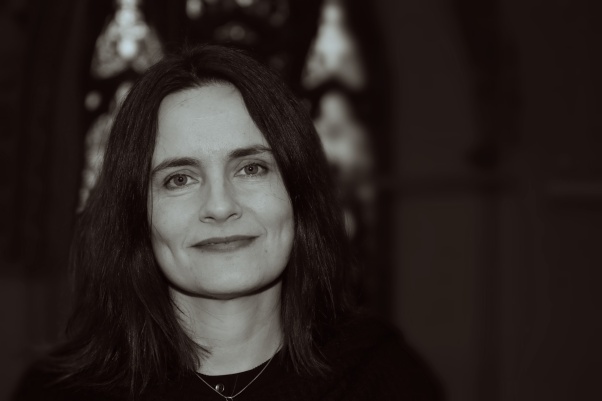 You can keep up to date with Aoibheann (above) on her website.

Listen to Aoibheann reading from Marina in Athenry Library on 10th May.