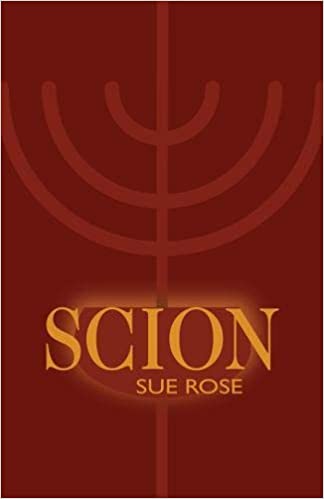 SG: Scion is comprised of 46 poems and a glossary. As I glanced through the collection for the first time, I found myself pausing at the glossary and reading through it. It surprised me how many terms I knew and how many that were unfamiliar with me. I wondered how knowledge – or lack of – Yiddish or Hebrew would affect my reading. What I found was that my reading of the poems was not paused or interrupted by having to refer to the glossary – as with all good writing, meaning can be inferred by context. Tell me about including a glossary and how would you like readers to use it?

SR: Thanks, Shauna. I’m so glad you didn’t feel that the use of Yiddish or Hebrew words hindered your reading of the poems. I did agonise over whether to include a glossary or not for this book and considered initially just glossing a few of the more obscure terms, perhaps at the bottom of a poem. However, it’s very hard to second guess what people know – I think American readers may be more familiar with certain Yiddish or Hebrew terms than UK readers, but it’s impossible to generalise. Although in poems like Don’t Knock Me a Teakettle, I think all the terms are pretty much self-explanatory, I was concerned that the impact might be lessened in other poems by not knowing the meaning of a particular word or the importance of a Jewish custom, so I wanted to make sure that readers had the necessary tools, if they wanted to use them.  As the book came together, I found that I had used more Yiddish or Hebrew words in individual poems than I had expected or intended to and I don’t think I had realised in any self-aware way how much this vocabulary had permeated my upbringing, defined my relationship with my parents and shaped my identity. My glossary was an acknowledgement of that, while also functioning to an extent as a supplementary creative space, with the inclusion of a few less-than-objective definitions! I’d say really that the glossary is there as an aid, rather than required reading – I hope it sheds light on some of the poems but in an indirect, complementary, way, rather than being a necessary adjunct.

SG: I love the title Scion – how it refers to being both detached, living and descended from and how, in your opening title poem, we embody – literally –  the ghosts of our own mothers, anchored in our lineage. Did the title come first, or did it emerge when you put the collection together for publication?

SR: The title was quite a long time in coming, actually. Although I know poets who have their collection title very early on and work towards fleshing out its potential, I nearly always put together a book by theme and atmosphere, rather than title. In actual fact, I find titles very difficult. Before I put together this book, I had been working on a sequence of poems in response to black and white photos of trees by Lawrence Impey, which resulted in the limited edition hardback art book, Tonewood. As some of the poems in this sequence tackled themes of identity and heritage, I wanted to include them in this book. Ideally, therefore, I needed a title that could serve as an umbrella for themes relating to heritage, lineage, horticulture and Judaism! “Scion” was a gift – not only is it used to describe an offshoot in horticulture and a descendant of a family tree, it also suggests the word “Zion”.

SG: Scion really is a fine example of how writers can make the personal and specific mean something – through life movement and emotion – universally and collectively. I found myself intrigued by and particularly interested in how the collection explores the labels we give ourselves alongside those we are given; how we perceive and are perceived; and what we feel is core to our identity, or not.

If we consider “In Kaput Memoir”, a heart-wrenching piece of a beautiful life, the narrator, born in March 1929 informs us “I didn’t tell anyone I was Jewish – it never came up” and yet, generations later, our narrator is filled with identity conflict and confusion in the poem “Jew-ish.” Can you talk a little about how you managed to explore identity and belonging in a very personal context and yet have your poems speak universally about the commonality of life?

SR: I think I tend to work from the basis that all individual experience is shared experience in some way. When I write about the personal, I am completely invested in conveying the emotional truth of a situation and in crafting the poem in such a way as to make it a compelling vehicle for that truth. I think that when you do that, when you delve into your own fears, joys and sorrows in order to confront them, you allow other people to use your words and thoughts as a means of reaching their own fears, joys and sorrows, which can be similar or completely dissimilar – it doesn’t really matter. What matters is that moment of communication, of acknowledging that we are all human and that we all struggle with parts of our past, present and future.

I found it very interesting to touch on my parents’ sense of identity as Jews, their experiences as the descendants of Jewish immigrants, and how they were shaped by the political mood in the pre-war and post-war periods; how so many people were caught between assimilation and acculturation and how, in these turbulent times, when overt anti-Semitism seems to be on the rise again, it feels necessary to stand up and be counted, to lay out a stall for diversity…

“Jew-ish” and “Kaput Memoir” are like the bookends of this exploration. The former hints at my father’s Jewish past – his grandfather was a Rabbi and he was brought up in a very orthodox setting. The latter looks at my mother’s far more secular upbringing and tastes. It was important for me to have both voices in the book, as so much about my life has been influenced by my childhood, my upbringing and my conflicted relationship with religion. Scion is my attempt to see where I stand along this continuum of faith and culture – something that I think changes depending on age and where you are in life.

SG: In this collection – at least as it appeared to me – lineage is an ongoing line, one which connects backwards as well as forward. Writer and poet Sheenagh Pugh in her review says the collection covers an “oddly reassuring timescale of centuries”.

You explore the darkness of place, almost accidental but terrifying in its relevance and how it can dictate life or death. I’m thinking here of “Tracks” whereby an everyman figure “let’s call him Rabbi Rosenstein” steps on to a train to Edgware and “can call the shots/on his passage; he can alight.”

Also I’m thinking of “Badges” where the ordinary fun of growing up is juxtaposed with and dominated by the political: “…not so far,/perhaps, from the stamps of history,/those special hats, yellow belts,/yellow taffeta, yellow stars,/the past beneath the skin.”

SR: I think there is no escaping the past, however distant it is. We are the product of a ‘slow relay’ that takes us from there to here in small increments. I do feel that lineage is a continuum and that we are related in equal measure to our distant forebears and our future descendants, as individuals and as part of humanity. Forgetting the lessons of the past and becoming complacent in the present is dangerous – as a writer, I think it is important to provide an aide-memoire so that past experiences, however painful or damaging, are not lost or squandered but become formative, preventive, both on a personal scale and on a collective one.

SG: Yes, I agree that we cannot escape the past – and I like what you say that we’re all products of a slow relay that takes us from there to here and yet we are also part of a continuum. That idea of the collective – with nature and with ourselves – and how we are interconnected.

As I read these poems, I found that grief runs through the collection, like tears collecting. I was very moved by “Growth, “Bedside”, and the particularly open and almost vulnerably wounded “Kaput Memoir.” In a way, you seem to anchor this grief in the every day. Can you talk a little bit about the order in which the poems appear and the themes that you explore in Scion. Would you consider that grief underpins the collection?

SR: I do think grief is a very present theme in this collection, as it was in my first Cinnamon Press collection From the Dark Room – many of the poems in that collection were written in response to the illness and death of my father, while quite a few of the poems in Scion were written about my mother’s dementia and death. However, I hope that grief is not the overriding emotion that readers get from the book – I would like to think of the poems handling loss and bereavement as poems of love rather than of death, because although they contain grief, they also celebrate the role those people played in our lives. As the proverb goes, “Grieve not that they are gone, rejoice rather that they lived.”  Other than that, as we’ve already touched on in this conversation, I think my main preoccupation with this book was an exploration of identity – with age, I think I’ve become more alert to the question of identity – as a woman, as someone regarded as elderly (even vulnerable in these Covid-19 afflicted times), and as a lapsed Jew with an agnostic bent. It is a questioning of my place in the world and of my relationships with others… However, although I would hesitate to call my work political, I have been worried and horrified by the growing menace of racism generally, and I cannot deny that this also influenced the mood of the book.

In terms of the ordering of the poems, as always this was a headache! I wanted the book to be an exploration of all the themes outlined above, but I also wanted it to be positive, celebratory and not mired in the past. As I mentioned, I was also keen to include some of the relevant poems from Tonewood, but not in the order that they had appeared in that book.  What I went for, and hope I achieved, was a roughly chronological meander through the past, passing the decline and death of my mother, to end with a celebration of family (as represented by Hava Nagila), the possibility of further discovery (Zion) and a recognition that we are more than the sum of our pasts.

SG: I particularly like what you say about the recognition that we are more than the sum of our pasts. In relation to the theme of grief also being about love and life, I found that you captured that circularity so perfectly.

Lastly, here are some fun questions:

Thank you, Sue for such generous and enlightening answers.

Readers, you can purchase a signed copy of Scion direct from Sue Rose at suerosepoet@gmail.com or from Cinnamon Press